After a busy week of early starts, up at 3.30 and out at 4.00 am it was back to normality.  Although at this stage of the season I’m not sure what that is!! There was a mid – week job at the Garrison near Ash Vale. It was another one of those jobs that we have done several times before. It was once again an early start so we arrived on site at 6.00 am. We had a serve time of 12.30 for 600 very hungry Rugby players. As we set up our 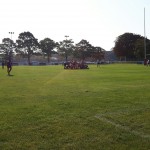 hog roast in Ash Vale, we watched all the players arrive. As before there were a lot of Fijian players. Needless to say they were rather bulky and the type who didn’t say a lot. They kept themselves to themselves, but still chatting away in their local dialect. It was certainly a language I didn’t understand!! Fortunately this time the weather was fine for the hog roast in Ash Vale and really quite warm. Previously it had rained all day and so it was poor turnout all considered. This time it looked a lot busier with copious amounts of water bottles being ferried about. There were also lots of soldiers, squaddies being exercised in full battle gear, gently jogging down the Avenue. Fortunately we were ahead of ourselves and so service started at 12.30 as requested. We were ready for the crowds, and serving from three stations. The first wave was easily served from the three stations, and it all felt too easy. It was great to have a ticket system. I certainly got the impression that they would have come back again and again. The second wave was considerably larger. It just took us a little while to get through, but within the hour everyone was fed with stragglers appearing and others that wanted seconds coming up. There was then time to watch a bit of Rugby, before a quick clear down and pack up. Fortunately we had got away in good time and so there was no need to park up on the M25 at Heathrow for a change.