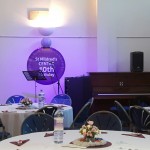 hog roast in Addiscombe. It is never much fun traveling the M25 on a Saturday morning. Mind you I’m not sure it really matters which day you choose. This time there was an overturned lorry near Heathrow. Poor fella, I hope all those involved were all ok. Fortunately I had taken notice of the signs telling me of the delays. I therefore decided to travel along the M4 into a lower part of the M25. It seemed like a good plan until there was another hold up. This time about six cars in a shunt. The delay wasn’t too bad, just another 15 minutes. However I eventually got to St Mildred’s Hall with enough time to ensure that the hog roast in Addiscombe would be on time. Parking had been reserved, which always helps with unloading. It was certainly a centre that was busy with lots of Saturday morning groups. I set up in the back garden which was a little trek, but welcome after so much time at the wheel. The occasion was a celebration of the founding of the hall. It had been open 10 years and quite clearly very well used and marketed. Although it was raining it was a bit of a ‘half and half’ event with salads inside and providing the weather held up I was to remain outside. The weather was certainly eventful with thunder and lightning nearby, but everything held up well. I even found time to help the various organisers. A great chance to score a few points, providing I am not interfering with proceedings. I was a little concerned that I was ru 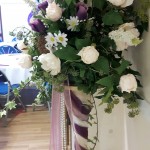 nning late, but fortunately I seemed to be making up time with a very efficient machine (they all vary). Despite the very light showers, I served outside with revelers coming up several times. I even had for the second night in a row a compliment of…’ I have had many pig roasts, but this is easily the best ever’…. What more could I ask for. A super crowd and a much enjoyed party.