The first job after I was back was on the following Wednesday at the Olde Bell in Hurley. This was slightly unusual in that it was a daytime event for St Jame’s wealth Management. The hog roast in Hurley was at 3.00pm and so on this occasion there was not even an early start. However, crossing Oxford was a nightmare – this has regularly become a battle since the road improvements. It was bad enough when they were doing all the alterations. There were intermittent closures and there never seemed more than a handful of workers. This was further made worse with cautionary signs limiting speed for non-existent workers, cyclists. However the Olde Bell was a very standard set up. The hotel had provided salads to accompany the Hog Roast Hurley and everything was on time. 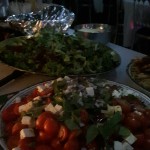 During the event set up I received a call cancelling the next day’s event. This was pretty unusual. The dilemma was what to do with the two pigs and indeed all the salad that had been bought. Most of it would have to be thrown out, sadly. The upside was that it would be easier preparing for the weekend. There was a local event that had lots of little bits that needed attention. It was a booking that had grown in numbers and style. There was a three choice barbecue with a Hog Roast plus five salads and minted new potatoes. This was all followed by Mascarpone and Passion fruit cheesecake and a white chocolate blondie. Once we had set up on the tennis court we started our mise en place. All fairly straightforward except that the heavens opened and this just added to the logistics of preparing everything and keeping all dry. Probably what made it more awkward was that the wind got up, and the barbecue was harder to get going. However we had the ‘A’ team and all was sorted using all the tricks to get the Barbie going and indeed all the rest of the food on the buffet tables. Fortunately the marquee was a very dry sturdy affair.

All went well with guests very happy, although a little late. It was definitely a wet one !!